The Do Not Call list includes former and current police officers who have engaged in conduct that renders their potential testimony unreliable or non-credible.

The State's Attorney's Offices will not call officers on the Do Not Call list as witnesses.

"While the overwhelming majority of Baltimore Police Department officers are hardworking, dedicated and trustworthy public servants who decidedly risk their lives every day doing what most won't; when a police officer is convicted of a crime and/or their credibility and integrity is compromised, it stifles our ability, as prosecutors, to do our jobs and adequately pursue justice on behalf of the communities that we serve,"

Mosby said the release of the list shows a commitment to police reform and accountability. 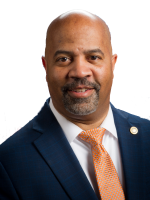 Randy Reid
Randy Reid comes to WEAA 88.9 with over 25 years of broadcast experience. As a small market News Director Randy has experience working with young journalists. As News Director at WEAA he will be working and training our Student Journalist from the School of Global Journalism & Communication in the learning lab at WEAA.
See stories by Randy Reid