Fresh Inspiration with Kelle' Avent: Your greatest competitor is your lower self 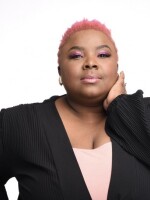 Kellé Avent
Kellé Avent is a native Baltimorean, and 13-year veteran of the industry she calls her “first love,” radio. She graduated from Baltimore City College and later matriculated to Delaware State University, where she earned her bachelor’s in mass communications and marketing. Kellé has worked on air and as a producer in major markets including Philadelphia, Los Angeles and Baltimore to name a few. She began her tenure at WEAA in November 2013 as the host of the Gospel Grace Morning Show, which airs Sundays from 7-10 a.m., and joined the underwriting team in May 2014. When she’s not on-air or helping client with their underwriting needs, Kellé mentors teen girls and young women, challenging them to overcome the worst, encouraging to obtain the best, and igniting them to accomplish it all through faith. She is also wife to Carlos and mother to Lyric.
See stories by Kellé Avent