BALTIMORE, MD (WEAA) — “If you don’t live it, you can’t even understand how horrid those two and a half years living in sanctuary was,” said Oneita Thompson.

Each year, thousands of people come to the United States seeking asylum or protection from persecution.

Oneita Thompson and her husband Clive Thompson traveled from Jamaica 16 years ago seeking asylum in the U.S. after Oneita’s brother was murdered and her family was threatened.

Within three months of arriving in the U.S., Oneita applied for asylum.

Her family was granted authorization to live and work in the United States.

During Donald Trump’s presidency, his administration put in place a number of rules and regulations making it difficult for those seeking asylum in the United States.

The Thompson family was then told they had to leave the country because they had lost their asylum case.

They refused to leave and decided to fight the deportation order.

Oneita and Clive Thompson, along with Peter Pedemonti, co-director of New Sanctuary Movement of Philadelphia join Claudette Lindsay, host of the Caribbean Exchange to share their heartbreaking story and how they persevered. 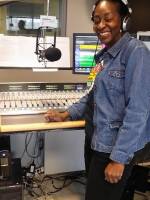