The single was released on the rapper's YouTube channel in January 2015, and gained over 2.5 million views one week. Silentó was signed by Captiol records, and the track then peaked at number 3 on the Billboard Hot 100. 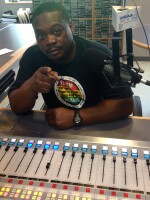 Mike "Mike Nyce" Middleton
Mike Middleton is the Operations Director for WEAA 88.9 FM. Mike is a veteran radio professional with more than 20 years of experience in radio & audio production. He began his career as a board operator at WXYV(V-103) and WCAO (Heaven600) and moved up the ranks serving as Dee Jay, Assistant Production Manager, Assitant Music Director, Production Director, and On-Air Talent for companies like Radio One, Cumulus, and Summit Broadcasting.
See stories by Mike "Mike Nyce" Middleton
Related Content