Spotlight on Women in Music with Mykel Hunter: Mickey Guyton

BALTIMORE, MD (WEAA) — Musical artist Mickey Guyton recently made history in becoming the first Black woman to be nominated in a country music category in the 2021 Grammy Awards.

Her song, 'Black Like Me', which describes her experiences as a Black woman in the country music industry, earned Guyton her first Grammy nomination for Best Solo Country Performance.

Click below to hear her story on Spotlight on Women in Music with Mykel Hunter.

I sat here and tried to find the words to write up the perfect caption for this video but the only thing I could come up with is how grateful I am. Thank you for believing and if there is anything to take away from this is to never EVER give up on yourself. #GRAMMYs pic.twitter.com/ihZPppssDu

I never in a million years thought that "Black Like Me" would get the attention that it has. It allowed me to shine a light on my experiences as a Black woman in America, but so many other people's experiences too. This is our story. 🖤 https://t.co/7pKPsWFssg pic.twitter.com/C2pqDrmQlM 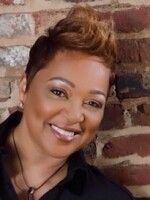 Mykel Hunter
As the host of Mornings with Mykel, Mykel Hunter's warm, honey-toned voice is one of the first WEAA listeners hear each morning. The savvy multi-media personality delivers a deep natural passion for everything media and motivating and connecting with people from all walks of life. Mykel is a graduate of Morgan State University and is a sought-after professional voice-over artist who has worked for an Atlanta-based reality show, Empowerment Temple Church in Baltimore, and various other companies.
See stories by Mykel Hunter